OLD ORCHARD BEACH — The Szanton Company, a Portland-based housing developer, broke ground today on a major affordable housing development that will create an influx of new year-round housing for Old Orchard Beach residents who are  55 or older.

The Milliken Heights development, at 38 Portland Avenue will add a 55-unit apartment building that includes 42 units for households earning below 60 percent of the area median income. The other 13 units will be rented at market rent.

The development is being financed, in part, with three long-term loans from MaineHousining totaling $8.8 million.

Szanton Company President Nathan Szanton said collaboration and cooperation on the development between town and state officials as well as private and non-profit partners, including MaineHousing made moving forward on the project possible.

“Executing a project like this takes many players, playing many different roles,”  Szanton told a gathering of about 30 including members of the town council and the town’s planning board at the construction-site ceremony.

MaineHousing Director Daniel Brennan said the demand for new affordable housing units in Maine was at an all-time high and his agency was providing more support for developing those units than it ever had in its 50-plus year history.

Brennan noted that site work on the project was continuing on despite the ceremonies on Tuesday. “It goes to show the dedication for this work that the Szanton team has for this work,” Brennan said. “They are not going to be interrupted by a bunch of us getting together to say nice words.”

Brennan said the need for affordable housing has never been greater and that demand was being exacerbated by a housing market that was facing pressures from the COVID-19 pandemic and the desire by many to move to Maine.  He said coastal communities like Old Orchard Beach were feeling the squeeze even more than other places as tourists and residents were often competing for the same housing. “Tourism is the economic foundation of a place like Old Orchard Beach,” Brennan said. “And employers need workers and workers need places to live and this community gets it, they understand it.”

“Our collective response to the affordable housing issue has never been stronger,” Brennan said. He said the federal and state financial support the agency has received as a result of pandemic relief funds had allowed for the creation of the biggest pipeline of new affordable units the state has ever seen. “Unfortunately it’s simply not enough to build housing, we need smart policies, we need smart local leaders like you have here in Old Orchard Beach that get it. Who understand that zoning regulations, land-use regulations sometimes get in the way of what great companies like Szanton Company are trying to do,” Brennan said.

Town leaders including former town manager Larry Meade, who was recently elected to the town council, said adding 55 year-round affordable housing units in Old Orchard was an accomplishment that should not be taken for granted.

“It speaks to the character of community and our residents that this new development was approved without controversy, challenge or rancor,” Meade said.

The new building is expected to be available for occupancy by February of 2023.

Financing for the new development was made possible with federal tax credits administered by MaineHousing and a collaboration between Szanton, the Town of Old Orchard Beach and Evernorth, a nonprofit that helps finance affordable housing development across New England.

The units at Milliken Heights are expected to fill a gap in affordable year-round housing in the Old Orchard Beach, a busy summer tourism hub.

All the apartments will be set aside for households whose head is age 55 or older. Subsidized units will rent for approximately $1,000 a month while the market rate units are expected to rent for about $1,250 a month, according to Szanton.

Since 2004, Szanton has developed 11 mixed-income apartment buildings throughout southern Maine and Seacoast New Hamshire. The company has opened buildings in nearby Biddeford and Portland in recent years but Milliken Heights will be its first development in Old Orchard Beach.

Old Orchard Beach’s population of 8,960 can swell to over 75,000 from June to August, and many rentals are only available to locals from September through May.

Milliken Heights will be located in the Town Center, a short walking distance from a grocery store, post office, pharmacies, banks, hardware store, library, and Maine’s longest beach.  The Portland Avenue site is located approximately 1,000 feet north of the Old Orchard Beach Town Hall.  Situated on the west side of Portland Avenue, Milliken Heights will sit in the largely wooded area east of Milliken Pond.

The building was designed by Architype Architects and is being built by Ducas Construction. 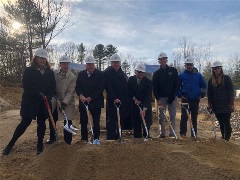 MaineHousing has helped Maine people own, rent, repair, and heat their homes since 1969. MaineHousing is an independent state authority created to address the problems of unsafe, unsuitable, overcrowded, and unaffordable housing. MaineHousing is a $1.8 billion financial institution with a staff of over 180 people. MaineHousing assists more than 90,000 Maine households and invests more than $300 million in the Maine economy annually.

©2022 MaineHousing. All Rights Reserved.
MaineHousing does not support or endorse external links.